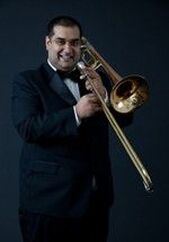 Jay Nandagopan is a classically trained trombonist, achieving a
Bachelor of Music from an Australian Conservatorium. He has performed
with many artist all around the world, including: Ray Charles, James
Morrison, the "Ultimate Rock Symphony" tour with Roger Daltry, Peter
Frampton, Alice Cooper and Gary Brooker. Before moving to New York,
Jay performed on cruise ships with many headline performers including
Micky Dolenz from the Monkees, Herb Reed and the Platters and many
other world class acts. In New York and New Jersey, Jay is a
professional freelance trombone player.
Google+